There has been a recent resurgence of interest in theater masks and masking as well as the use of masks in today’s theater practice. The importance of the mask throughout human history is significant and for our contemporary audiences it is a powerful tool in the telling of stories.

The theatre mask inspires through the provoking of mystique. In the hiding of the individual it reveals not only the actor’s humanity but that of the audience.  The mask at once provides distance to the event and requires of the viewer an intimate connection.

In the past two to three decades the theater mask has experienced resurgence both as a tool for the training of actors and as a driving force in story telling. This phenomenon exists because theater masks for the audience present a universal truth, express common experience and cross cultural boundaries.

Theater masks are widely used in the commercial theatre. On Broadway they are seen in shows such as The Lion King, Juan Darian and The Greenbird. Companies such as Cirque du Soleil also employ the use of Theater masks to create a world in which their performances can take place. Masks are used a lot in children’s theatre to bring to life fantasy worlds. Excellent examples of this are plays produced by companies like Enchantment Theatre out of Philadelphia. 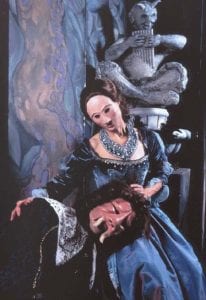 Enchantment Theater’s Beauty and the Beast

Masks are widely used throughout Europe and Asia in theater and performance. Most European and Asian countries have had for centuries rich masked cultural traditions. Theater Joker in Norway, Bambalua Teatro in Spain are two excellent examples of companies using theatre masks to tell stories.

Productions of Greek Plays are still employing theater masks much as they were employed in the telling of these stories in ancient times. The worldwide impact of the teachings of Jaques Lecoq has created a global resurgence of the Commedia dell’Arte. Even film has integrated the use of mask in the creation of characters such as Darth Vader from Star Wars.

When one looks at theatre practice across the globe it seems as if the presence of the theater mask is as prevalent today as it has been throughout history.

Check out masks for shows created by Jonathan Becker

2 Responses to How Are Theater Masks Used Today?