By Jonathan Becker on May 23, 2016 in How Are Masks Used in Theater Today
39shares 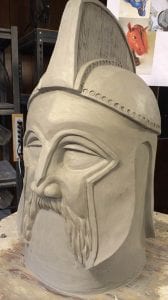 Often when writing about the use of masks in ancient Greek theater historians speak in broad general terms.

Authors write that the ancient Greek theater masks featured “facial expressions” and “portrayed emotions” such as happiness or sadness. Although these statement s are not in and of themselves completely incorrect, they reflect a very superficial understanding of what masks for performance are, how they are made, how they are used and why we make use of masks in performance.

One can assume that theatre artists of ancient Greece had as much, if not more, knowledge of the sophisticated expressive form of the theater mask as we do today. Masks throughout time and across cultures have been connected to religious, spiritual and ritual practice. This was no different concerning their use in Greek theatre given the performances were part of the ritual celebrations of the time. The artists who both performed and created them would have engaged in a profound exploration of practice much the same as we do today.

The mask for performance and ritual is an expressive form rather than intended as a frozen expression in time. An expressive form is one that has a wide range of expressive qualities. A successful mask can play a gamut of emotions. The actor can play anger or sadness through a mask based in joy and love creating a very poetic and human experience for an audience. 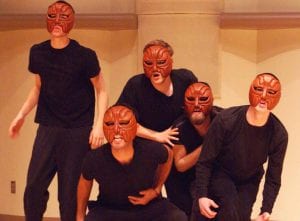 Masks that are living form, such as Greek Theater Masks, are created by artists who have an understanding of the rhythmic life of the passions and how they are experienced by humans. The mask maker creates a mask that is a combination of lines and planes that animate the negative space around the mask itself. Because of the interaction of the rigid form with the negative space the theater mask appears to change expression as it is moved or as the body of the actor moves underneath it.

The specificity of the choices made by both the mask maker and the performer create a heightened experience for the audience. The singularity of all the choices being made allows for a larger than life presence for the mask.

The mask is a tool that reveals. The actor uses it to share the discoveries being made, the thoughts being had and the emotions being felt with the audience. In turn because of the archetypal forms inherent in the theatre masks the audience experiences themselves and their life struggles through the sharing of the mask. 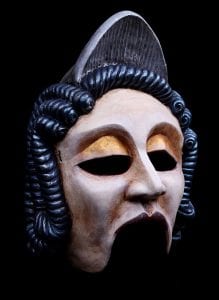 One can assume that the use of Greek theater masks in ancient Greece was in many ways no different than they are being used today in the heightened environment of classical theatre. When the theater mask is considered to be more than just a costume element it becomes the driving force of the theatrical event. Our ancient cultures and societies are often assumed to have had a much greater connection to the natural world. The mask is one such extension of that knowledge and daily practice.

Take a look at the modern designs for Greek Theater Masks by Jonathan Becker.