How Are Theater Masks Used in Actor Training?

The following is a sequence in which theater masks provide the cornerstone as concerns understanding and integration of physical principles for the actor. Several movement classes are listed and theater masks play a role in some as well as physical classes that are intended as preparation for the mask work. 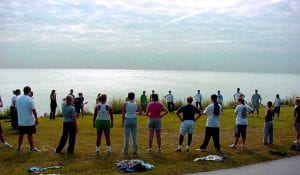 The sequence is designed to address the following:

Each class is taught from the assumption that daily life is a kinesthetic experience interpreted by the intellect, followed by discoveries reactions and decisions.

The intended outcome of the sequence is to create an awareness of the kinesthetic and intuitive that is of benefit for the actor.

Questions that drive the work:

What does it mean when we say “you” are the character or the Character is you plus…. ?

The teaching and learning focuses on the kinesthetic and intuitive responses and understandings.

Questions that drive the work:

What is the role of the physical instrument in the work of the actor?

What is the role of the intellect in the work of the actor?

Where is the intellect of benefit and where does it become an obstacle?

How does a connected body help with honest emotional response to imaginary given circumstances?

Courses end with a project that directs the student’s attention and developing ability toward work with text and how the physical work is used for that purpose.

Each class in the movement sequence builds off the class before it.

A very brief summary of the current arch looks like this:

Provides a connected athletic instrument that can be understood and developed for the actor/singer/dancer.

Intro to Movement and Voice:

Teaches the actor how to effectively use the physical aspects of performance to support clear and specific story telling, the playing of action and to clarify what the audience understands from the proposals offered by the performer.

Devising through World Culture and Mask:

Appling the artist’s understandings to the creation of new works through analysis and the development of a theatrical language that can be understood by a contemporary audience.

Here is slightly more detail on the build as concerns each course and the intended outcomes:

This course is the foundation. The assumption is that the actor cannot get information from the physical instrument (the body) unless there is a degree of athleticism and actual physical connection in the body. Said differently: The actor must be fully aware of the body as a whole or a single entity rather than a bunch of dissonant parts.

Addressed in the course are:

Alignment: Corrupt alignment leads to injury, tells a singular story thus limiting the actor in casting and creation. Corrupt alignment also interferes with the ability of the actor/singer to breath effectively in order to support sound and create honest emotional response.

Flexibility: the ability to build strength is related to flexibility and vise a versa. Flexibility is also necessary for injury prevention.

Nutrition: Effective training and learning are connected to what goes into the body.

Breath: The performer is taught how to connect breath to movement, intercostal breathing and learns the anatomy of how one supports sound.

Intro to Movement and Voice:

Students are asked to do a research project that covers all of the various practitioners/teachers/methods represented by the acting faculty. We discuss how the basic principles are the same and can see how when one person says “X” it means the same as when another says “Y”.

Questions that guide the work:

What is an impulse?

When can I use my personal impulse and when do I need to redirect or adjust?

What does it mean to pursue something with intent?

What is effective partnering?

How do I listen?

Students are introduced to the the concept of authentic voice and supported resonant sound that is connected to intent and their partner.

Students are taught how to transfer the conceptual work of the impulse training and partnering to scene work with text. This is done by working with the same scenes being worked on in the acting class in preparation for juries.

Neutral mask: the student learns how to work with being driven through the world purely by discovery and how the actor’s discoveries of an imaginary world must be personal, honest and truthful as well as present and visible for the audience.

Larval Mask: the student learns the importance of play and invention in a world driven by an undeveloped intellect. The performer meets their inner toddler yet must maintain a sophisticated understanding of the relationship of character and story to the audience

Character Half mask: The student is now integrating the principles understood in neutral mask and larval mask with a specific character’s perspective on the world and justification of spoken text through heightened intention and supported “authentic” voice. This part of the course uses the same semantics being used in the voice class as the students are working on Shakespeare. The hope is they will see the problems in each class as the same problem with the same solutions.

Animal Work and the Chorus: Listening, singularity of thought and listening through another. Partnering with an awareness of story, audience, objective, intent and the other actors.

Students recreate the movement of an animal through a study of mechanics, the role of the spine and the essential core of being. A chosen animal is recreated. The students then engage in a hunt to kill exercise the learn heightened intent and then the animals are transferred to human characters based on the animal core.

Following the animal work students take part Greek Chorus work transferring the heightened listening and level of intent to the play of the chorus working in tandem with several other chorus members. One become many in the singularity of thought. The play of masks in the chorus now opens the work in a meaningful way to the audience.

Devising through World Culture and Mask:

Devising is a culmination making use of the principles learned and applying them to the creation of new work. As is the case with actor created theatre the ultimate solution to the problem in the creative work is better acting. Devising reveals to the actor what they are not considering when they are picking up a work that has already been created for them. When they have to make something from nothing they begin to realize what the work of the actor really is when approaching a text.

Explore the world of mask training. Play with neutral, Larval, Character Half Mask and Greek Theater Masks in your classroom. Shop masks here.