By Jonathan Becker on June 9, 2016 in How Are Masks Used in Theater Today
32shares 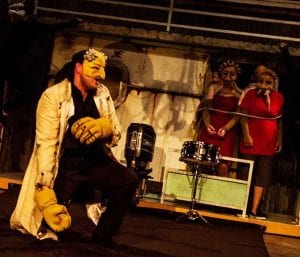 Masks continue to be a staple in contemporary theater. Modern playwrights are writing plays that require their use to create exciting and poetic commentary on modern society. Ann Washburn is one such author as concerns her play Mr. Burns, A Post Electric Play.

The plot summary is as follows:

Shortly after an apocalyptic event, a group of survivors gather and begin to attempt to retell the episode “Cape Feare” fromThe Simpsons. The second act takes place seven years later with the same group, who has now formed a theatrical troupe that specializes in performing Simpsons episodes, including the commercials. The final act is set 75 years in the future. “Cape Feare” is now a familiar myth and has been reworked into a musical, with the story, characters, and morals repurposed to fit the artistic and dramatic needs of a culture reeling from destruction of civilization and the near-extinction of humanity. 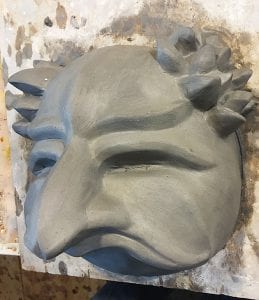 Redesign of Tartaglia as Mr. Burns

The studio was recently contacted to create a set of masks for the show that reflected the characters from the Simpsons.

A number of commedia masks and character half masks were redesigned and created for freeFall Theatre’s production in St. Petersburg, Florida. Eric Davis, the artistic director of freeFall and the director of this production selected existing designs from the site and I modified them to reflect the characters from the Simpsons.

I was impressed with Eric’s choices. Arlechino for Bart, Semarldina for Edna, Cintia for Marge, Pantelone for Homer, Evil Tartaglia for Mr. Burns, Francheschina for Lisa,… the list goes on. All of the character half masks for Mr. Burns…(most from the commedia designs) had the dynamic qualities and personality traits of the cartoon characters inherent in the original mask designs.

The characters from the Simpsons are cultural archetypes like the stock characters of the commedia dell’arte. One might go as far as to say the Simpsons is a modern version of the Commedia in some ways. Masks used to portray these characters then seems very appropriate. Bart is truly a contemporary Arlechino, Homer is the sad dim version of Pantelone, Edna as the gruff and gravely Smeraldina. All of the masks chosen were in some way related to the characters themselves. 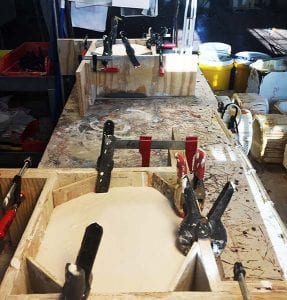 The masks in the play help to both heighten the theatricality of the play and remove us farther from reality. One might also infer that the masks in the futuristic moments of the play connect us to our primitive past. Masks reveal, they connect us to ritual, they speak truths and most of the process of making them (at least in this case) has remained unchanged for over 3000 years. The poetry of this connection to history is a beautiful juxtaposition to the commentary of the play.

Mark Lieb a theater critic for Creative loafing in St. Petersburg, Fl writes of his experience of freeFall’s production:

“This play affected me more than most others. I left the theater disoriented and worried: for me, for Washburn, for this country. It’s not often that a drama leaves me so moved. Consider that a recommendation.”

Order the play and order the masks. Let’s make theatre theatrical again and keep masks alive in the theatre of today.