Home » Blog » The Studio » Masks and Jonathan Becker: The History 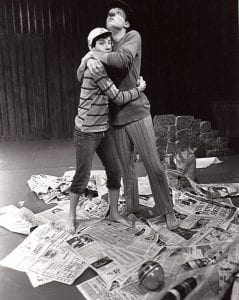 And Now For Something Completely… 1985

My first experience with masks was in the summer of 1979. I was 15 and attending a summer conference on clowning at Oberlin College. One afternoon on my way to my dorm room I walked through a lounge in which Avner Eisenberg was giving a talk on neutral mask and sat down to listen. Avner spoke of the mask having universal qualities and what it revealed to the actor. He put it on, stood for moment in a stillness that created a deafening silence and then slightly turned his head. In that moment the world shifted. I saw the mask change, I saw Avner change, I saw the audience change and I felt the air in the room change. That night I saw Avner in his one man show, Avner the Eccentric. The show was pure magic. I decided then that I wanted to go to the school he had gone to and learn what he had learned in the way he had learned it.

In 1985 while in New York City, working as an intern at If Every Fool Inc. helping to produce the 2nd NY International Festival of Clown Theatre, I experienced masks once again in a commedia workshop with Stanley Allen Sherman. I had no idea what commedia was but once again, deeply fascinated with masks. I wanted to know how they were made and why they worked the way that they did. I wanted to know why they inspired the actor and seemed to change expression. Stanley had done the same school as Avner. Two experiences with two people from the same school; once again I wanted to go there.

I returned to complete my BA at The College of Wooster after my internship in the fall of 1985 and set out to write, direct and tour a performance on physical theatre. The show was an exploration of what I had learned from the people I had met in NYC. It was in working on this project that I made my first masks. They were paper mache copies of my face. created over a plaster positive I made with my friend Charlie Buchwald who was an art major and lived on my hall.

4 months after graduation from The College of Wooster I left for Paris with my friend Drew Richardson to attend the school I had been thinking of since that summer in Oberlin: The International School of Theatre Jacques Lecoq.

The First Mask at Ecole Lecoq

At the Lecoq school we were given the assignment to make a mask. The mask we made was used for our training in improvisation classes, movement analysis classes and in Autocourse (the part of the school where we created new works in small ensembles). I spent hours making a mask, working its surface and reaching to create something of perfection. What I arrived at was an unmitigated failure. The mask was beautiful but did not play. The form was dead. It had no life at all. The mask had a frozen expression of judgmental surprise. The mask was totally reflective of me at that time.

The failure to arrive at a successful form was devastating. We had to use the masks we made in all of our classes and creative work. Our masks identified us at that time. I saw my failure as a definition of me. The mask work was also during a period in the school when we all knew that decisions concerning who would be accepted into the second year were starting to be made. As a result others avoided working with me and I struggled to be confident in the individual work.

I still have very strong memories of the struggle of those times and for the past 28 years every time I have stepped in front of the sculpture stand I have been trying to solve the problem of that first mask. In retrospect it was the best failure I have ever had.

Jonathan Becker From Then to Now

Masks became by default part of my life after graduating from the Lecoq School. A group of us went to Switzerland to form a company and we began teaching to earn a living. I had learned so much through the mask training that I wanted to use masks to teach with. I couldn’t afford to buy masks so I began making them. Others started asking me to make masks for them and over the following years I created a fairly large portfolio of work.

In 1999 the portfolio had grown to a place where I was spending a ton of money printing it out to show perspective clients and perspective employers. I had heard of this thing called the Internet. My friend Andrew Wilder was doing web design at the time. I asked him to create a website for me where I could post all the pictures of my work for others to see. He suggested we set up a commercial site and that I sell masks on line. I thought this was the craziest idea I had ever heard. I didn’t believe anyone would be interested in buying masks online. We argued for about a month. Andrew won the argument and I wound up with a very successful online business shipping masks all over the world. I’ve learned its good to loose arguments with your friends.

The last 16 years have seen over 10,000 masks leave the studio to destinations in 45 countries. I have had the opportunity to be an invited guest artist at 29 institutions in 6 countries on three continents.

3 Responses to Masks and Jonathan Becker: The History