A Few Comments on Theater Masks as Tools for Actor Training

This semester at Ball State University has been about using theater masks in the actor training sequence.  The training sequence is based on the work done at the Lecoq School in Paris.  We are using the neutral and larval (Basel masks) to teach acting principles so the actors can approach text and scene work more intelligently. We have completed neutral mask, are in the middle of Larval and will finish with character half mask.

The neutral mask work focuses on the action of discovery, the larval masks focus on the play discovery leads us too and the character masks focus on the influence perspective has on a discovery. Said another way; the neutral mask exists only in the present moment with no past (nothing exists to color a discovery). The larval mask is in a very early state of development and so easily distracted by all the possibilities a discovery leads one too that a moment could lead anywhere at any time. The character mask’s discoveries are based on a singular outlook that is connected to a specific past.

The emphasis in the mask training is on the play of action rather than the psychological constructs of a set of given circumstances. The mask work starts in a world of a pure singular action, which exists for no other reason than to lead to the next action through a discovery and grows into a sophisticated world in which text, action and discovery are influenced by past experience and a set of sophisticated given circumstances. The proposal is that there is no difference in our acting or in the process of acting when engaged in masked theater or when engaged in theater without masks. The only difference would be the relationship the actor is creating between the event and the audience.

In the neutral mask one simple moment of action leads to the next, in the larval mask the actor must justify the playful action that results from a simple discovery by allowing each moment to grow into a direction that connects to the basic state of development of the individual mask the actor is supporting.   The neutral mask acts with an intellect that is fully developed but has no past experience to base a decision on so it just acts. The larval mask has an undeveloped intellect that finds everything in a moment of interest, is easily distracted by the developing world around it and has a very specific and singular energy of approach. The character mask has a fully developed intellect and a singular perspective or outlook on the world that is based on a very specific past. In each case the actor must use themselves, their personal way of being in the world to support, invent and justify the developing action.

The neutral mask reveals to the actor who he or she is, the larval mask allows for a purely personal play and the character mask demands of the actor an empathetic connection to a very specific way of being in the world.

Theater Masks place an emphasis on the physical play of action, the actors need to create an expansive sense of self in order to occupy a performance space and an awareness of the role the audience plays, rather than an approach to the work from an intellectual, psychological or emotional point of view. The approach could be described as: I do therefore I am, I do therefore I feel, I do therefore the audience experiences. 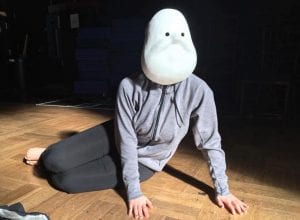