Home » Mardi Gras: The Celebration and the Mask 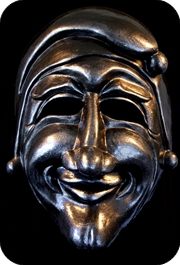 Mardi Gras is French for “Fat Tuesday” the day before Ash Wednesday when Lent, the traditional period of penance that precedes Easter, begins. The origin of “Fat Tuesday” is believed to have come from a pagan custom of parading a fat ox through the streets before a period of fasting. The celebration surrounding the parade was filled with excessive eating drinking and general bawdy behavior before the fast. 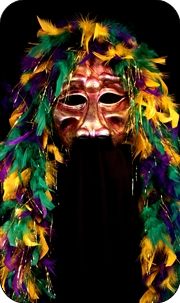 Masks have been part of human celebrations since primitive man picked up an animal head and put it on to act out the hunt prior to sharing in the bounty of the kill. Their use grew from these simple celebratory stories to the telling of stories of creation, ritual practice, use in theater, opera and dance. Masks tend to carry within them the stories of the cultures from which they originate as well as reflect the tone and theme of the ritual celebrations of life for which they are used. The masks of Mardi Gras carry this history as well.

Carnival masks and Mardi Gras masks have their origins in ritual celebration and the tradition of disguise for the mingling of classes, the ability to engage in deviant behavior without retribution and the representation of the celebratory themes. For example, many of the masks in the Swiss Carnival celebration are drawn form the rituals of putting on frightening masks, grabbing a drum and a bunch of cow bells and running down the mountain side to scare away the spirit of winter and bring in the spring. 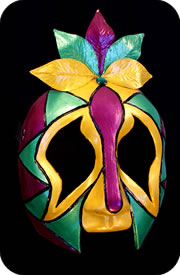 Mardi Gras has a 300 year history in the City of New Orleans and is rooted in the French affinity for masked balls, royal ceremony and public entertainments. French culture finds itself married to the African culture’s attraction to ritual art, rhythm, mask traditions, dance, spirit and soul. Mardi Gras, the Carnival of America, is the largest masked part on the continent.

The tradition of wearing masks at Mardi Gras has evolved since the late nineteenth century. Originally the use of masks was considered a diversion for poor people and the reputation of especially women who wore masks during Mardi Gras was in question. Today the wearing of Masks in Mardi Gras is widely practiced by all. The Mardi Gras mask and costume allow the wearer to transcend his or her daily life in a mass of others who are doing the same thing. The transcendence is the magic and power of the Mardi Gras celebration.